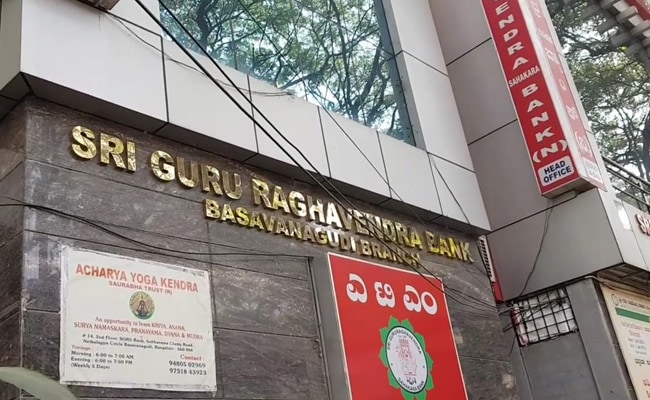 Sri Guru Raghavendra Sahakara Bank Chairman K. Ramakrishna has blamed the Reserve Bank of India (RBI) for the imbroglio and said he could return the depositors’ money the next day the regulator withdrew the business restrictive order.

“The RBI restricted the bank to allow only Rs 35,000 withdrawal. We are following the RBI rules. If tomorrow itself the RBI revokes restrictions, we are ready to return full deposits to customers,” Ramakrishna told depositors with folded hands.

Hundreds of Sri Guru Raghavendra Sahakara Bank depositors on Tuesday showed up to withdraw the Rs 35,000 allowed by the RBI. Anxious depositors formed a serpentine queue in front of the bank.

The RBI has asked the cooperative bank to disburse only Rs 35,000 after adjusting any liability the customers owed to the bank.

“A sum not exceeding Rs 35,000 of the total balance in every savings or current account or any other deposit account by whatever name called may be allowed to be withdrawn by a depositor,” said the bank sharing the RBI order though text message to customers.

The RBI also ordered that whatever liability a depositor was having to the bank in any manner, either as a borrower or surety, that amount might be adjusted first to the relevant borrower accounts.

The RBI instructions, issued by Chief General Manager Yogesh Dayal under sections 35 A and 56 of the Banking Regulation Act, 1949, said the cooperative bank should not, without prior approval of the RBI in writing, grant or renew loans and advances, make investment, borrow funds or accept fresh deposits from January 10, 2020.

On Monday, amid dramatic scenes and pandemonium at the Sri Guru Narasimha Kalyanamandira auditorium in Basavanagudi, near Ramakrishna Muth on Bull Road, the bank’s chairman claimed that the bank was not facing any cash crunch.

Bengaluru South Lok Sabha member Tejasvi Surya also assured depositors about the safety of their money. “I want to assure all depositors of Sri Guru Raghavendra Co-operative Bank not to panic. Finance Minister Nirmala Sitharaman is apprised of the matter,” tweeted Surya.

He said Sitharaman is personally monitoring the crisis. “She has assured the government will protect interests of depositors. Grateful for her concern,” said Surya.

The bank also publicised a letter from Surya, in which he said a group of depositors and bank authorities met him at 11.30 p.m. on Saturday.

“Surya spoke to Sitharaman on Sunday and apprised her of the situation. The Finance Minister, after speaking with the RBI Governor and other authorities assured Surya that the government will do everything in its capacity to protect the depositors’ interests and the bank’s long-term interests,” said the letter from Surya’s office.

According to the missive, Surya spoke to Sitharaman thrice on Monday who promised to safeguard the depositors, including senior citizens.

After addressing the worried customers on Monday evening, the police saved Ramakrishna by locking him in a room as anxious depositors outside demanded return of money.

Though he had to be protected, at one time during his explanation, many depositors clapped for a point he made in Kannada.

Other financial details include total business value of Rs 3,979 crore, working capital of Rs 2,507 crore, gross income of Rs 261 crore, total expenditure of Rs 200 crore, gross profit of Rs 60 crore, provisions and reserves of Rs 5 crore, net profit of Rs 36 crore and a net worth of Rs 155 crore among others.

The bank also showcased photographs of a few awards it won and talked about new launches such as mobile and internet banking, RTGS and NEFT transaction, availability of personalised branded chip-based debit card, text message alerts and multiple other schemes.

Ramakrishna has convened another meeting with depositors at the National College ground on January 19.

(This story has not been edited by NDTV staff and is auto-generated from a syndicated feed.)